By Zoltan Szogyenyi on February 6, 2011
Last revised by:
Tweet

Thanks to Engadget, one of the most appreciated smartphones presented at CES are being compared. LG Optimus 2X is the first dual-core handset, while the SE Xperia Arc is the slimmest, and we have to admit, the most sexy smartphone we saw until this very day. Both devices were presented at the CES 2011, and will be at MWC 2011. The LG Optimus 2X is already available on the Europe market, on the other side though, the SE device is still waiting for its release. The two smartphones are running the same OS, the Android 2.2, but with different UI’s. 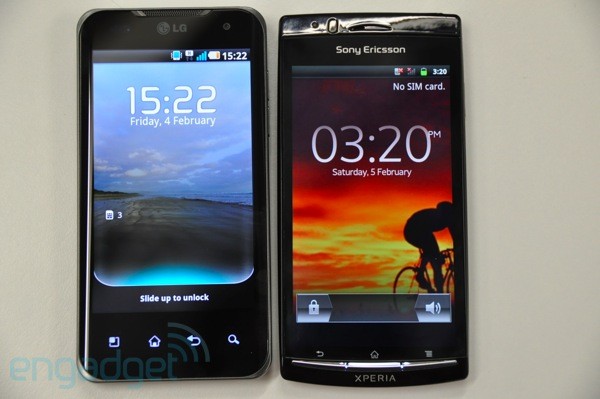 The display of LG’s device is a 4.0-inch one, while Xperia Arc’s is a more generous 4.2-inch. The curvature of the SE handset makes it really feel like it’s the slimmest smartphone and it’s weight is dramatically minimal. Even if Optimus 2X’s design is well made, it cannot be compared to Xperia Arc’s curved and slim design. Overall, the winner is Sony Ericsson, but let’s not forget that the LG Optimus 2X is the first, and for the moment the only dual-core handset on the market.